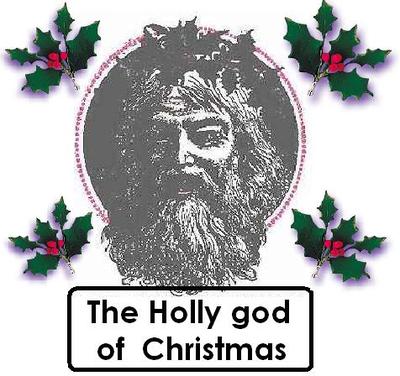 Yes the world is held in an ancient spell
that sparkles and yet it cries
for it ignites and it excites
the wonder of our eyes.

“Ancient pagans fashioned ivy “into wreaths
and garlands for decorations during the winter
months.” Ivy had close ties with the Roman god
of wine, Bacchus.  Holly, meanwhile, figured
prominently in the Roman celebration of the
Saturnalia (upon which the Christmas holiday
was directly modeled), as it was considered
sacred to the god Saturn. Among the Celts,
holly played a major role in summer and
winter pagan solstice observances.”
– “The Green Mountain Gardener”
Dr. Leonard Perry,
“Holly and other evergreens were subsequently
adopted by common Christians as Christmas
decorations in Roman times. This, despite
protests from disapproving Church Fathers,
who regarded the decorations as “too pagan.”
Such protests notwithstanding, evergreen
decorations were well on their way to becoming
Christmas institutions, symbols of the pagan
past co-opted by the new religion.”
– “The Green Mountain Gardener”
Dr. Leonard Perry,

“Holly was the sacred plant of the god Saturn
and was used at the Roman Saturnalia festival
to honour him. Romans gave one another holly
wreaths and carried them about decorating
images of Saturn with it.”
-All About Christmas
Mistletoe and Holly

“Among pagans – In the days before Yule
a tree is cut and brought into the home
to decorate.  Holly and mistletoe are also
hung around the house. Any greenery brought
inside during Winter are used to extend an
invitation to nature to join in our cele-
bration. A Yule altar is usually set up and
decorated with the colours red, green, white
and gold.  It is tradition for some on Yule
to stay awake all night and greet the sun
when it rises. During the wait for the sun,
rituals are held, and spells are cast and
joyous celebration takes place.”
-A Pagan History of Christmas
by Lisa Pawley
“Symbols of The Pagan Yule are the evergreen
tree, Holly, mistletoe, wreaths, the Yule log
and a wheel with eight spokes.  The eight spokes
represent the eight major Pagan Sabbaths or
Holy Days (Holidays)and are represented in
Christmas by Santa’s Eight Reindeer.”
-A Pagan History of Christmas
by Lisa Pawley

“The early Christians discouraged the use of
evergreen decorations in Christian homes and
assemblies, because their display had long been
associated with heathen festivals.”
-Campbell ; The Story of Christmas

“Gift Giving – during the Roman festival of
Saturnalia, gifts were given as good luck
emblems and houses were decorated with
greenery.  The early Christians, however,
frowned on this pagan ritual, and wouldn’t
have any part of it.”
– Christmas Traditions & Trivia
1999 HFCWillcox

“The ancient Romans decorated their homes
with greens for the mid-winter feast of
(the pagan) Saturnalia (in December).”
-Christmas Wreaths – The Tradition
By: Elisabeth Ginsburg

“We Christians neither cover our doorposts
with wreaths, nor…decorate our house like
some new brothel.  We…do not celebrate
along with you the holidays…The pagan Romans
clad their doorposts with green and branching
laurels…In the Saturnalia…Presents come and go
..There are…gifts…and Banquets…yet Christians
should have no acquaintance with the festivals
of the pagans.”
– Tertullian, (A.D. 155-220),
quoted by David Bercot,
A Dictionary of Early
Christian Beliefs, 1998, p. 342).

“Scandinavians celebrated the solstice
as Yule.  In Norse mythology the first man
sprang from an evergreen tree.  On the
winter solstice – December 24-25 the
Evergreens were decorated with red apples.”
-The Christmas Tree
“A Modern Herbal” by Maud Grieve.

“Pagan Germans were tree worshipping
people.  Like the old Romans they prized
evergreen trees.   Branches were brought inside
to give shelter to the wood spirits who dwelled
in these trees.  Sometimes small trees were
brought inside.”
– Merry Christmas, A History of the Holiday;
by Patricia Bunning Stevens

“To the Nordic people of Scandinavia,
any tree that did not ‘die’ by losing its
foliage through the bitter cold of the long
freezing winters was considered to be
harboring a tree-spirit of unfailing life.
Appropriately called ‘evergreens’,  it is
not surprising, therefore, that evergreen
trees are adopted for use as Christmas trees.”
-Pole-Spirits North and South
(Santa Claus and the Origin of
the Christmas Tree)
by Patrick Harrigan;
researcher and journalist

“People in Scandinavia once worshipped
trees. When they became Christians, they
made evergreen trees part of Christian
festivals.”
-THE WORLD BOOK ENCYCLOPEDIA,
1966 Edition –
Article Titled – “Christmas”

“Tree worship was a common feature of
pagan religion among the Teutonic and
Scandinavian peoples of northern Europe
before their conversion to Christianity.
They decorated houses and barns with
evergreens to scare away demons.”
-COMPTON’S
INTERACTIVE ENCYCLOPEDIA,
1997 Edition; article on “Christmas”

“Since earliest times everygreen trees
have been worshipped as symbols of life,
fertility, sexual potency and reproduction,
and were often brought into the house and
set up as idols. The pagans of old have hung
apples and other fruit as a food offering
and would offer gifts to the tree, which is
where we get putting presents under the tree.
This was purely pagan in origin.”
— Holidays and Holy Days,
by Tom C. McKenney

“The common name of the mistletoe is
derived from bird droppings. “Mistel”
is the Anglo-Saxon word for “dung,” and
“toe” is the word for “twig.” So, mistletoe
means “dung-on-a-twig.”
-All About Christmas
Mistletoe and Holly

“Mistletoe was held sacred by the Norse,
the Celtic Druids and the North American
Indians. The Druid priests would cut
mistletoe from an oak tree with a golden
sickle. The branches had to be caught
before they touched the ground. They then
divided the branches into many sprigs
and distributed them to the people,
who hung them over doorways as protection
against thunder, lightning and other evils.”
-All About Christmas
Mistletoe and Holly

“The Druid priests would cut mistletoe
from an oak tree using a golden sickle.
The branches had to be caught before
they touched the ground. ”
-All About Christmas
Mistletoe and Holly

“Mistletoe was held sacred by ancient peoples.
Druids wore sprigs of holly in their hair when
they went into the forest to watch their priests
cut their sacred mistletoe.”
-All About Christmas
Mistletoe and Holly

“From time immemorial the mistletoe
has been the object of superstitious
veneration in Europe. It was worshipped
by the Druids, as we learn from a famous
passage of Pliny. After enumerating the
different kinds of mistletoe, he proceeds:
“In treating of this subject, the admiration
in which the mistletoe is held throughout
Gaul ought not to pass unnoticed. The Druids,
for so they call their wizards, esteem
nothing more sacred than the mistletoe.”
-The Golden Bough.  1922.
Chapter 65 – LXV.
Balder and the Mistletoe
Sir James George Frazer (1854–1941).

“The Druids gather the mistletoe with
solemn ceremony. A priest clad in a white
robe climbs the tree and with a golden
sickle cuts the mistletoe, which is caught
in a white cloth. Then they sacrifice the
victims.”
-The Golden Bough.  1922.
Chapter 65 – LXV.
Balder and the Mistletoe
Sir James George Frazer (1854–1941).

“The Druids believed that a potion
prepared from mistletoe would fertilise
barren cattle, and the Italians holding
that a piece of mistletoe carried about
by a woman would help her to conceive
a child.”
-The Golden Bough.  1922.
Chapter 65 – LXV.
Balder and the Mistletoe
Sir James George Frazer (1854–1941). 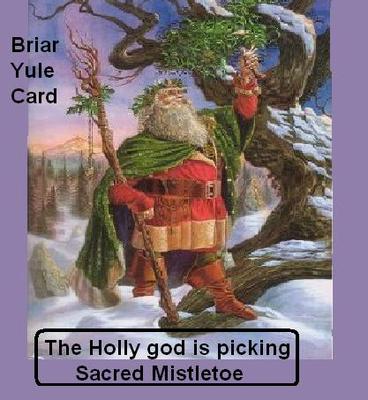 Above is a “YULE” card – depicting the Holly god
picking and gathering his Sacred Mistletoe.

“No one loves a party like the ancient Romans,
and their festival of Saturnalia is one of the
most well-documented celebrations of the Winter
Solstice. This week-long bacchanal included
exchanging of gifts, lots of food and wine,
dancing and music. This festival honored Saturn,
of course, and he was an agricultural god.
To keep him happy, fertility rituals took place
under the mistletoe. Today, we don’t quite go
that far under our mistletoe (at least not usually)
but it does explain where the kissing tradition
comes from.”
-Mistletoe: Myths, Mysteries and Medicine
By Patti Wigington

“Mistletoe was a sacred plant for the
Druidic people in both Europe and Great
Britain, revered for promoting fertility
and protecting from evil spirits.”
-In the land of the mistletoe
L’Atelier Vert
Everything French Gardening

Whose Christmas is it – Anyway ?

Many pagans and wiccans complain that the Christians stole
Christmas From them.  After all – They did celebrate December 25
long before Christ was born.

Some Christians say that it doesn’t matter that Christ was NOT
born in December – and they claim that they are conquering
paganism by “Stealing” their Winter Solstice Celebrations.

More importantly, would Christ approve of this commercialized
holiday that honors the many gods of paganism ?

Who does Christmas Really Belong to ?

“Let’s get this right,
Christmas was a beautiful,
uplifting Pagan celebration
that Christianity purloined
and perverted for its own
dubious ends.”
-DUNDEE University
Emily Mackie

“Why did the Christians want the
twenty-fifth of December? Why that
particular date? Why did they deliberately
steal this very important date from the Pagans?”
-The Solstice Season
by Madalyn O’Hair

“Christians, with the authority of the
Roman emperors behind them, stole Christmas
from pagan society. Now perhaps it is time
to give it back. It is time to take Christ
out of Christmas.”
-Liberating Christmas from Christianity
Let’s Take Christ Out of Christmas
By RAYMOND J. LAWRENCE