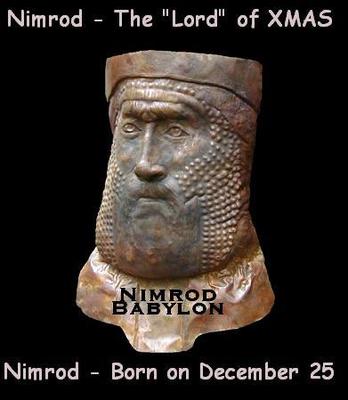 Who Are You Honoring
on December 25th ?

The “LORD” that you give honor to each year on
December 25th – is NOT the one that you think you
are honoring.  Jesus was born in a warm month,
when the shepherds were still sleeping out in the
fields with their flock in the night. Jesus was not
born in the cold rainy month of December.

His birth date was obscured because God
commands us to observe Jesus death and NOT
his birth.

Then whose Birth is the world honoring
on December 25 ?

None other than the First Human
to Oppose Jehovah God.

And Who was that ?

“Nimrod’s rebellion was to head a great confederacy
in open revolt against God. This confederacy is described
in Genesis eleven and that it was an organized revolt
against Jehovah God is very clear. From this point
onward – Babylon in Scripture always stands for that
which is in opposition to God “
–Fundamental Baptist Institute
Gleanings In Genesis; chapter 16
Nimrod And The Tower Of Babel
by Author W. Pink

“Long before the Christian Era itself,
A Festival was celebrated among the heathen.
At that precise time of the year (December 25),
in honor of the birth of NIMROD, the son of
the Babylonian “Queen of Heaven”. This same
festival was adopted by the Roman Church,
giving it the name of Christ.”
–The Two Babylons; p. 92-93
by Alexander Hislop

“The Chaldea paraphrase of this verse says,
“Cush begat Nimrod who began to prevail in wickedness
for he slew innocent blood and rebelled against Jehovah“.
-Types of Antichrists in Biblical Times
Nimrod, the King of Babylon,
builder of the tower of Babel
by Arthur W. Pink

Nimrod was born on December 25th.  When he died,
he was represented by a “Yule” Log.  The Dead remains
of this once Grand tree-god, was thrown into the
“Fireplace”.  Each year, on the date of his birth,
a “New” evergreen tree suddenly appeared with presents
and trinkets upon it.  Even the ancient woodcut above,
reveals the symbols of “Ancient Babylon” and its founder,
Nimrod.

“Nimrod started the great organized worldly apostasy
from God that has dominated this world until now.
Nimrod married his own mother, whose name was Semiramis.
After Nimrod’s death, his so-called mother-wife,
Semiramis, propagated the evil doctrine of the survival
of Nimrod as a spirit being. She claimed a full-grown
evergreen tree sprang overnight from a dead tree stump,
which symbolized the springing forth unto new life
of the dead Nimrod. On each anniversary of his birth,
she claimed, Nimrod would visit the evergreen tree
and leave gifts upon it. December 25th, was the birthday
of Nimrod. This is the real origin of the Christmas tree.”
-The Plain Truth About Christmas
by David J. Stewart | December 24th, 2005

“Traditionally, a yule log was burned in the fireplace
on Christmas Eve and during the night as the log’s embers
died, there appeared in the room, as if by magic, a
Christmas tree surrounded by gifts. The yule log
represented the sun-god Nimrod and the Christmas tree
represented himself resurrected as his own son Tammuz.”
–After Armageddon -Chapter 4
Where do we get our ideas?
by John A. Sarkett

In the picture below – notice Nimrod (on the left)
holding a Rheindeer in one arm and the “Yule” Tree
in his hand.    This is similar to a modern day depiction
of Santa Claus of Christendom.

“So our Christmas tree — and our yule log — have
tremendous meaning, but not a Christian meaning.
The yule log is the dead Nimrod, human ruler of
ancient Babylon, who was eventually deified as the
sun incarnate, and hence a god. The Christmas tree
is mystical Tammuz, the slain god come to life again.”
–After Armageddon -Chapter 4
Where do we get our ideas?
by John A. Sarkett

The Nimrod Deception is Satan’s Deception

The Nimrod deception has been spread to and retained in
all parts of the world – over all centuries – even today.
The Norse gods, the Egyptian gods, the Roman gods, etc., etc.,
have all retained different aspects of Nimrod, his mother, and their
rebellion against Jehovah God.

“So in Christmas, we have Satan counterfeiting
the real truth of God. The yule log and Christmas tree. .
All may be traced to ancient Babylon and the Mysteries
of Nimrod, Semiramis and Tammuz — Satan’s incredibly
clever counterfeit…”
–After Armageddon -Chapter 4
Where do we get our ideas?
by John A. Sarkett

“As these practices came down from Babylon to Egypt,
Greece and Rome, they took on different names. But the
practices remained the same. December 25th was claimed
to be the birthday of the chief gods from Babylon to Rome,
regardless of their different names. The original
Babylonian festival started when Semiramis, the wife
of Nimrod, claimed that overnight, an evergreen tree
sprang up from a dead tree stump beside his grave.
The dead stump supposedly symbolized her dead husband
Nimrod. The new evergreen tree was Nimrod come to life
again in the person of the god Tammuz. The stump or
Yule log, represented the dead stock of Nimrod and the
Christmas tree was Nimrod revived deified as the Sun
god or the ‘son of the Sun.'”
–CHRISTMAS
by Richard A. Davis

“The Babylonian pagan worship of Nimrod,
Semiramis, and the god-incarnate son
extended throughout the entire world
and eventually assumed the name of
Trinitarian Christianity.”
– The Two Babylons, pp. 240-252.

Nimrod pleased Satan by opposing Jehovah
God, and he was well rewarded by Satan.

How was Nimrod rewarded by Satan ?

Thousands of Years of Worldwide Worship

Nimrod and his mother have been worshipped from the
time of their rebellion against God, right down to
this very day.  Not only that, but they have been
worshipped and honored in every single country on
the face of the earth.

All the trimmings and trappings of Christmas have
come down to us, through the trickery of Satan, and
in a deception only known to those who study history
and research the scriptures as well.

Nimrod has been honored in many different disguises.
The trinity worship of He and his son, and of his
Madonna mother (Queen of Heaven) have been found in
all religious cultures around the world – both pagan
and Christendom.  From Babylon to Egypt and then to
Rome, onto Roman Catholicism and then onto her daughters-
present day Protestantism.

This article is only focusing on the Christmas aspect
of Satan’s deception.  Links at the bottom will take
you to other deceptions which also give honor to
Nimrod and his Deified family.

The “Holy” Mother and Child ?

“December 25 is when the birth of the son of the
Babylonian queen of heaven was celebrated 2,000 years
before Jesus was born. The name of the day itself —
“Yule” — is the Chaldean (Babylon) name for “infant”
or “little child,” the pagan counterpart… In ancient
Babylon (Nimrod)…the “divine” child. There is obviously
no connection with the birth of Christ.”
–After Armageddon -Chapter 4
Where do we get our ideas?
by John A. Sarkett

You are the Victim
of A Four Thousand Year
Old Deception

And you my friend, are the victim of this
Demonic Deception.  You give honor each
year to a man that put himself in place of God.
You painstakingly observe each and every
detail of a scam that was put in place almost
four thousand years ago.

How Satan must laugh and giggle – “HO – Ho – Ho”
at the stupid humans that have willingly
stepped into his “Trap” of deception.

“Where do we get our ideas?
Where do we get our religions?
The source is that first world empire,
ancient Babylon:  The Babylonian system
of idolatrous worship was established by
a historical personage by the name of
Semiramis, queen of Babylon, wife of Nimrod,
only a few centuries after the Flood, about
the year  2000 B.C. Babylon was to become
the foremost state of that day, and prevail
until approximately 539 B.C.

But the real God Jehovah was unknown
in that land.  Instead, the Satan-inspired
“Mysteries” were established, the chief
features of which included: worshipping
of the mother- and divine child. (Nimrod
and Semiramis).”
–After Armageddon -Chapter 4
Where do we get our ideas?
by John A. Sarkett

“Christmas is a well-laid trap.
In celebrating it, the people of the land
honor, worship, and glorify a god,
but NOT the God of the Bible. It is
appealing and attractive with all the
ornamentation and catchy music.
Nevertheless, it is a trap because
it is not true.”
-Christmas, Syncretism and Presumption
by John W. Ritenbaugh; December 2001

The really sad part about all this Foolishness –
is that most people, whether Christian or pagan –
do not care, even when they have learned
about the trap they are in.  They Like it.
They prefer it……

The Churches don’t Care
and Neither do the People

“Christianity has jumped in bed with paganism!”
-The Surprising Origin of CHRISTMAS!
William F. Dankenbring and John D. Keyser

“The wicked apostate Church fornicated spiritually
with the heathen, pagan religions of the world,
and “ADOPTED” the date of December 25th
as the “birth-day” of Jesus the Messiah,
who was born Nowhere NEAR that time of year!”
-The Surprising Origin of CHRISTMAS!
William F. Dankenbring and John D. Keyser

“Nimrod was Noah’s great-grandson.
This system at Babel became the source of all
false religion in the world. Apostate Christendom
has a direct line of succession back through Roman
and Greek paganism right to Babel, because Roman and
Greek paganism, it is plain to see, came out of Babel.
Their gods are just renamed gods from older cultures
which take you back to Babel. Of course, we know from
history that the Roman Catholic Church came in as a
mixture of paganism and Christianity through
Constantine’s desire to unite his empire with one
unified religious system.”
–APOKALUPSIS NOW
The Harlot Church
Chapter 17 of Revelation
by Jack Shelton

“The Garden of Eden was in Southern Iraq,
not far from where Nimrod, under Satan’s motivation,
built Babel, which was the beginning of Babylon.
The Babylonian spirit is invading the world.
Its influence is breathtaking…and spreading its
idea to the entire world. There is no other proper
description of Babel and the evil intent of this
first expression of false religion.”
–Babylon: The Axis of Evil
by Joseph Chambers

“Mankind in general, has followed variations
of one kind or another, of the religion of
Babylon, to this day.”
-Ralph Woodrow;
Babylon Mystery Religion; 1966

“Rome…assimilated religions from her many
conquered territories.  All these religions had
commonalities, for they all came from Babylon.
These practices infiltrated and overcame the
professing Christian Church, which later came to be
dominated by Rome itself.”
-Ralph Woodrow;
Babylon Mystery Religion; 1966

“This is the cup which the Babylonish system
has made all the world to drink. It is not limited
to the Roman Catholic Church of Rome, but she certainly
plays a major role in today’s religious deception.”
-Ralph Woodrow;
Babylon Mystery Religion; 1966